When Orange Amplification founder Cliff Cooper opened a music shop and recording studio in the summer of 1968, he never imagined that from this near-derelict premises in the heart of swinging London, a sound and a brand would emerge that would still be going strong more than forty years later. With innovative design concepts and a desire to create a new way to bring an artist’s sound alive to their fans and in the studio.

The tone and expertise that went into the development of the first Orange amps is legendary. Guitar luminaries like Peter Green and Paul Kossoff plugged into early prototypes at the Orange Shop, and their feedback was baked into the amp circuitry. In its earliest conception, as well as today, Orange has a unique sound that many have tried to copy but has never duplicated.

Orange took to heart guitar design legend Les Paul’s maxim that “people hear with their eyes”, and began producing heads and cabinets that once seen, could never be forgotten. All of Orange’s trademark design cues were there from the start: the vivid vinyl covering, the amp control hieroglyphics, and the regal crest, establishing a look that has set the standard for British amplifiers ever since.

As the sixties drew to a close, Orange amps began to be seen on stage with some of the biggest names in music. Fleetwood Mac were the first chart group to go Orange in late ‘68, taking the company’s first half-dozen 100 watt amps to America, and in 1969, Peter Green took the first 200 watt head on their spring tour with BB King. Pretty soon, the list of Orange converts began to fill up with names that still inspire legions of devoted fans today: Stevie Wonder, Jimmy Page, John Mayall, and even James Brown – the King of Soul himself – relied on Orange’s already famous tone.

The crunchy mid-range of Orange’s amps made them popular with blues-influenced rock bands like Led Zeppelin, Free, and even metal pioneers Black Sabbath. Sales exploded on the back of these influential endorsements, and with the release of the classic 80 & 120 watt OR amp, at one point Orange was even outselling Marshall. 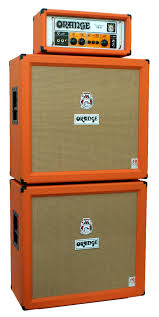 After the electronic revolution of the 1980s, rock music was ready for a comeback, and Orange was waiting. Bands like Oasis and Travis went looking for the sounds they’d grown up with, and turned to Orange’s quintessentially British tone in their droves. Orange was back, and production ramped up on a new generation of amps that would propel the company into a new millennium.

Just as the leading lights of the 60s and 70s helped shape the Orange sound for their generation, in 1997, Noel Gallagher popped in to Orange HQ to lend a hand. Touring with U2 at the time, Noel wanted more sparkle and crunch out of his amp, and after plugging in and cranking every available dial up to ten, he showed the Orange team what he meant. Noel’s feedback was integral to the development of a new overdrive circuit for the OTR head, delivering crunch, sparkle, and sustain that has endured through the history on modern rock.

In 1998 the flagship AD series launched, which helped establish Orange back at the top of the amp tree. Quickly becoming a favorite with recording stars everywhere, the AD15 was Jimmy Page’s amp of choice on tour with the Black Crowes. Then in 1999, the AD15 became the first British amp to win an ‘Editor’s Pick’ award from US Guitar Player magazine.

Rock’s return to the top of the charts inspired a new wave of aspiring guitarists and with the launch of the affordable Crush in 2001, for the first time Orange was able to cater to beginners and guitarists of modest means at a truly affordable level. At the other end of the scale, Orange continued to add to its impressive list of acolytes, handling the tone requirements for everyone from Prince to Slipknot, from Madonna to the Arctic Monkeys.

During the course of the decade, Orange continued to innovate, adding new models to the product line such as the Rockerverb (favored by Jim Root of Slipknot, and Madonna’s guitarist Monte Pittman). Then, in 2006, a completely new concept in portable amplification was unveiled: the Tiny Terror. This little amp came with its own custom-made gig bag, and sold over ten thousand units in its first year. Guitarists were suddenly liberated by the ability to take studio standard amplification absolutely anywhere. From its successful launch, the Terror family has grown to include the Dual Terror, the Terror Bass, the Terror Combo and the Dark Terror to name but a few. On the back of these impressive sales, and even more impressive innovation, 2006 also saw Orange win its first Queen’s Award for Enterprise.

In 2008 Orange celebrated its 40th birthday, launching custom shop limited editions, and the Anniversary OR50 head. A year later, the company would celebrate its second Queen’s Award for Enterprise, firmly establishing Orange as one of Britain’s global success stories.

Recently at the NAMM conventions, the Orange displays have been abuzz with interest in existing product lines, support lines and accessories, as well as glimpses at new model prototypes. Orange has and continues to set trends and work diligently towards making the art of music and sound their primary goal from design to finished product.

Available for delivery, direct to your door, are a full range of clothing, replacement valves, control knobs, foot-switches, protective covers and gig bags for Orange’s celebrated and innovative amps. Also in the new webstore is the award winning personal computer, the Orange OPC, which can be custom-configured to your specification.

In the store there is an updated extensive range of official Orange clothing. Joining the best-selling Orange “Full Stack” T-shirt design are the new black ‘Crest’ and grey “Vintage” T-shirts, all of which are available in men’s or ladies fit. Due to high-demand, men’s size XXXL has also been added. Completing all things Orange, you can also find ‘The Book of Orange,’ a stylish summary of the company’s rich 45 year history, in either hard or paperback.

Customers can order securely direct from the store using all major credit/debit cards or Paypal.

To find out more, and to check out some amazing ‘Combo’ deals, visit the new webstore https://www.orangeamps.com/store/us-store