Most Viewed Stories
Shadow Kingdom Records have uncovered another gem from the U.S. 80’s metal era. This time it’s a remastered reissue of The Awakening from U.S. Speed/Thrash Metal group POWERLORD, which will be released on August 19.
POWERLORD was one of those bands that popped up out of nowhere and completely fell off into obscurity. Out of all of the rare 80s US Metal diamonds, POWERLORD is arguably the very best at what they do. Their sound falls somewhere between SAVAGE GRACE and SLAYER and features professionally delivered, well written songs of the Speed/Thrash Metal variety.  The Shadow Kingdom folks re-mastered the tracks directly from the original master tapes, but since a lot of the band’s memories were lost when High Vaultage Records (an obscure German label) tried to re-issue the album, there is not much in the way of bonus, band photos, or memorabilia that could be included. Intact however is the most important thing: the music! And it sounds amazing! The Awakening represents what 80’s Metal was all about. The potential to be a much bigger band was there. Alas, it wasn’t to be and POWERLORD was lost in the wave of thrash that spawned the likes of METALLICA. One spin of The Awakening and you too will ponder what could have been.
Stream The Awakening in its entirety at:

More information on this and other Shadow Kingdom Records releases at this location. 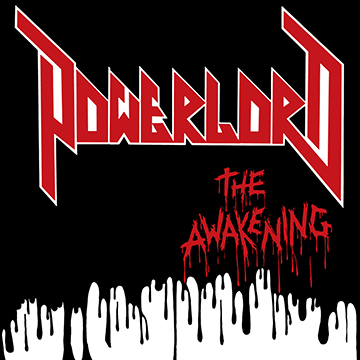 1. Masters of Death
2. Malice
3. Silent Terror
4. The Invasion of the Lords
5. Merciless Titans
6. (The Awakening) Powerlord