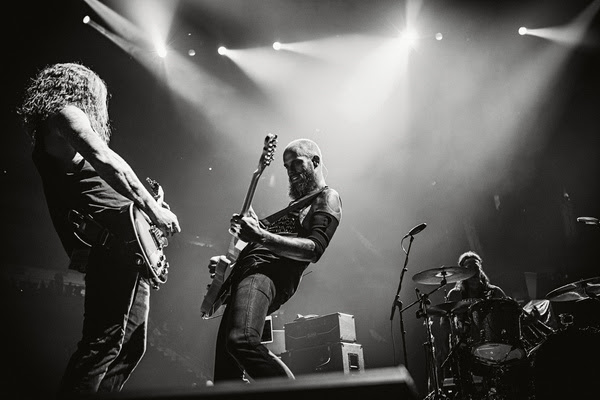 Baroness, who just wrapped up an extensive North American tour in support of their most recent album, Purple, return to the road this summer, kicking off a new round of U.S. dates on Aug. 12 at The Howard Theater in Washington, D.C.

The six-week outing includes stops at a number of festivals including Hopscotch, Houston Open Air, Psycho Las Vegas and Monster Energy Rock Allegiance. The band recently confirmed a spot on the Oct. 22 date of the Aftershock Festival as well. Footage from the Baroness’ recent performance at Sasquatch! Music Festival can be seen here: https://www.yahoo.com/music/baroness-morningstar-162824660.html.

“The cathartic experience of playing live music has not changed over the 13 years of performing,” John Baizley said in a recent interview with the SF Weekly. “But the sense of relief and release I feel as an adult is as intense, if not more than, when I was younger.  The response to this record has been really, really overwhelming. There have been some pretty dramatic changes in the way that our audiences react to our songs, and I couldn’t be happier about that.”

Tickets for all non-festival performances are on-sale this Friday at 10 am local time with pre-sales available tomorrow at 12 pm eastern via Yourbaroness.com. Pallbearer opens on all non-festival dates.

Purple was released on Dec. 18 via the band’s own Abraxan Hymns label. The Dave Fridmann (The Flaming Lips, Mercury Rev) produced album has been universally praised with Pitchfork saying Purple features “some of the biggest, strong songs Baroness has ever written,” Entertainment Weekly calling the album “their finest release yet,” Rolling Stone Australia dubbing it “the most dynamic, robust guitar album this year,” Mojo echoing those sentiments, saying “Baroness have delivered their masterpiece: an album grounding their cosmic heaviosity with earthbound, compelling drama,” and German magazine Visions declaring “the quasi-comeback Purple is their best album to date.” Purple and the songs from the album also landed on a number of year-end best of lists with “Shock Me” (video: https://youtu.be/hS5osAdTnm0) coming in at #10 on Entertainment Weekly’s Top 40 Songs of 2015, Pitchfork awarding it #6 on their Best Metal Albums of 2015 round-up and Rolling Stone placing the release at #7 on their 20 Best Metal Albums of 2015.