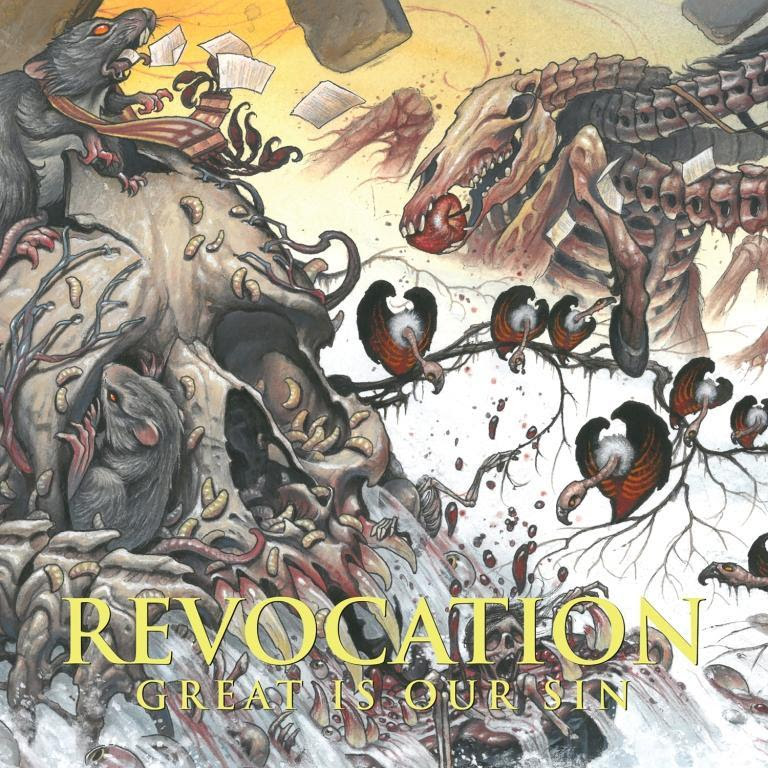 On July 22nd, Revocation will release their most dynamic, boundary-pushing and weighty record to-date: Great Is Our Sin. Today, the band has unleashed a third blistering track from the album – check out the lyric video for “Crumbling Imperium” now via Loudwire.com: http://loudwire.com/revocation-crumbling-imperium-lyric-video-premiere/

For another preview of Great Is Our Sin – and to pre-order the record in various formats! – please visit: metalblade.com/revocation, where the previous singles, “Communion” and “Monolithic Ignorance”, can be heard.

Reuniting with producer Zeuss (Hatebreed, Bleeding Through), who also helmed 2014’s Deathless and 2012’s Teratogenesis EP, Great Is Our Sin packs the requisite punch, yet retains the organic feel with which it was conceived. Known for their technical prowess, the band remained dedicated to upping the ante without ever losing sight of the importance of good songwriting. Whilst the lineup has changed over the ten years Revocation has been in existence, David Davidson’s (guitars / vocals) passion has never waned, and they are arguably sounding better than ever as they look toward the future. “We can’t wait to bring these songs out on the road and perform them for different audiences all over the world,” Davidson comments. “‘Great Is Our Sin‘ is a new chapter for the band, and collectively we feel that it is our defining record to date.”

In support of Great Is Our Sin, Revocation will be hitting the road this summer as part of the Summer Slaughter tour, alongside Cannibal Corpse, Nile, After the Burial, Suffocation, Carnifex, Krisiun, Slaughter to Prevail and Ingested. The trek kicks off July 23rd in Ft. Lauderdale, FL and runs through August 21st in Atlanta, GA; see below for all dates!