More’s recently-released album “Passion, Soul & Fire” has generated strong interest in the colorful musician, including a Cover Story that appeared in the Auburn Journal this past April. 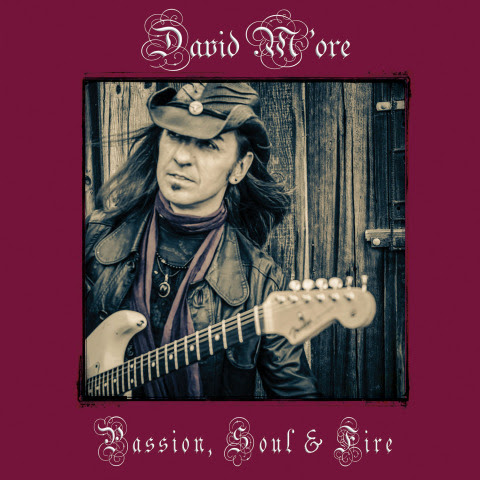 Passion, Soul & Fire: What The Press Is Saying

“Passion, Soul, and Fire offers pays homage to those great guitarists of the past, while at the same time retaining an identity which is entire David M’ore. There is so much to like about this recording, each song makes you salivate for the next. Each track is a high quality recording, well-engineered and all dominated by M’ore’s thunderous guitar.”

“The immediate thing that hits you about David M’ore is the voice; husky, graveled tones which really should be coming from a Deep-South grizzled old bluesman. The overall feel of Passion, Soul & Fire is similar to those 1970s and 1980s guitar greats, like Johnny Winter, Peter Frampton, Jimi Hendrix, and Stevie Ray Vaughan. The album opener, “The Devil’s Land,” makes a pretty clear statement of intent with a tasty lick as the main riff. It rolls along at a good pace with just enough vocal to keep us interested, but the guitar breaks and solo are clearly the main event.”

From the beginning, traditional Blues and British Neoclassical Hard Rock played a very important role in the evolution of the David M’ore style. Born in Argentina, he picked up an old guitar that his Godfather bought him for his eighth birthday and immediately began to explore vintage records. “The aggressive sound of the guitar drove me emotionally insane”, M’ore says. “I still listen to those old records from Johnny Winter. That’s where it all began”.

A born troubadour, M’ore frequently moved around the world as well as throughout the U.S. before finally settling in Hollywood in 1990. After the split-up of his band Blind Hole and his refusing to accept the oncoming Grunge Movement, M’ore escaped to Sacramento in 1993, winning a Sacramento Music Award there in the process.

David M’ore has taken his guitar pyrotechnics to a different level of instrumental majesty. Performing on a custom-made Strat carefully modified to his specifications, the colorful guitarist demonstrates his acclaimed six-string technique on both originals and cover tunes. “I love to pay tribute to those who influenced me, but at the same time, I like to be true to who I am” explains M’ore, whose influences include guitar greats Jimi Hendrix, Ritchie Blackmore, Joe Satriani, Johnny Winter, and Albert King.

If you’re a fan of excellent guitar playing and enjoy hard rock that strays towards the blues rather than heavy metal, it’s likely David M’ore’s expressive and explosive guitar attack is for you  . David M’ore, a man and his guitar.