“Once again we’ve joined forces with our good friend Mats Eks,” said the band. “This is the fourth video he’s done for us and in our opinion it’s easily his most ambitious. Shot in Dallas and Terlingua, Texas, Big Bend National Park, Mexico, Sweden and Norway, the images Mats used make the song feel more epic than we could have imagined. We’re honored to have someone like him in our corner when it comes to creating visuals for the sounds. He’s an artist, gentleman, and doggedly determined.”
The band recorded Avvolgere (streaming now at www.truewidow.bandcamp.com), which Brooklyn Vegan recently described as having “the somber vocals and atmosphere of shoegaze but the weight and darkness of doom,” with Matt Pence, who also recorded their 2013 release, Circumambulation.  Metal Hammer called the 10-track album “downbeat delirium” while Cvlt Nation said Avvolgere “ feels like an album of deconstruction, as True Widow are aiming to use the standard rock form, without being too flashy, and suggest to the listener a different perspective. Instead of the upbeat, vigorous and dynamic rock sound which is able to fill you with energy, True Widow’s approach aims for feelings of gloom and melancholy.” 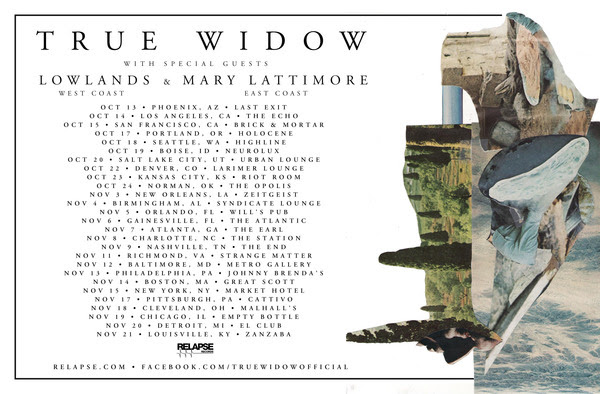