Redshift Headlights is the latest musical incarnation of Stephen Michael McCabe, formerly of The Willis, Congratulations on Your Decision to Become a Pilot and Cookie Bug. In 2009, The Willis performed on Late Night with Jimmy Fallon. A midwest indie-rock dive-bar veteran, McCabe also has a PhD in 20th Century American Literature and Creative writing and currently teaches at the University of Wisconsin-Oshkosh.

About INSIDE VOICES, the album: In response to these troubling times and anxiety about American identity, Inside Voices is an earthy, beautiful, orchestrated and textured indie folk rock album that introduces 10 different characters with 10 different backgrounds, each living through their own part of our united American story.

As seen in video, Michael McCabe performs many aspects of the music, a testament to an artist’s versatility, and also the ability to overcome obstacles, to create something wonderful. 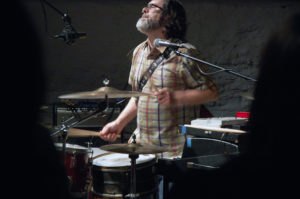 Inside Voices started out as a second solo record for McCabe, this time under the moniker Redshift Headlights. McCabe began playing guitar in 1994 upon arriving here to attend UWO and thereafter played and recorded with numerous bands, including Cookie Bug, Congratulations on Your Decision to Become a Pilot, and The Willis. His last record, however, was D The, a digital-only release of his solo, looping material (under the name Attack, Octopus) in 2008.

According to McCabe, Inside Voices is comprised of elements of thirty partially finished songs that he had been working on for about five years, compositions with placeholder lyrics and parts that he liked but none of which were good enough on their own.

After spending the last several years raising his five-year old son Addison, teaching English at his alma mater, and working on a novel, “it just felt like time,” so McCabe started pulling apart these thirty songs and demoing various versions in a home studio on January 1, 2015.

“Kind of like what Brian Wilson does, this modular composition where he takes a bit from one piece, then changes the key and brings it over to another,” McCabe said of the process. “That’s what I started doing. Taking these, something like, ninety parts and seeing what could go together.”

These tracks became the foundation for the album, as keys were changed and parts revamped, with the original thirty pieces eventually being dissected, rearranged, with different speeds and tempos, and drum beats and rhythms. He did this obsessively, spending around 20-30 hours a week demoing songs until he eventually stitched them together into ten complete songs in November. McCabe then set his sights on completing the album at Rock Garden.

He didn’t know Golde, but when his drum tracks for another local artist were re-mixed at Rock Garden, he was sold; simply running them through The Console improved their sound remarkably, giving it that “weird, magic sheen,” said McCabe.

After a cd containing McCabe’s final arrangements of each song turned out not to work for Golde—whom McCabe called “an amazing engineer and producer, and a really sweet guy”—he decided to start recording what he had anyway, getting feedback from Golde and his fresh mental palette as he went.

On December 8, 2015, McCabe formally started recording at Rock Garden, tracking all of his drum parts on that day. From there he worked methodically, strategically, and in a unique fashion over numerous 8-hour days. “I wanted to finish something,” said McCabe.

According to him, “Marc discovered the songs as I tracked them. He had no idea what the songs sounded like. First I did drums, then guitars, then Rhodes, then auxillary percussion and synths. He didn’t even hear melodies until February. So, he had no idea what he was hearing. He just focused on getting the best performance out of me in each session and somehow trusted me. I have no idea why.”

This debut album by Redshift Headlights, titled INSIDE VOICES is coming out March 4th, 2017.

Listen to some of the album on his website here