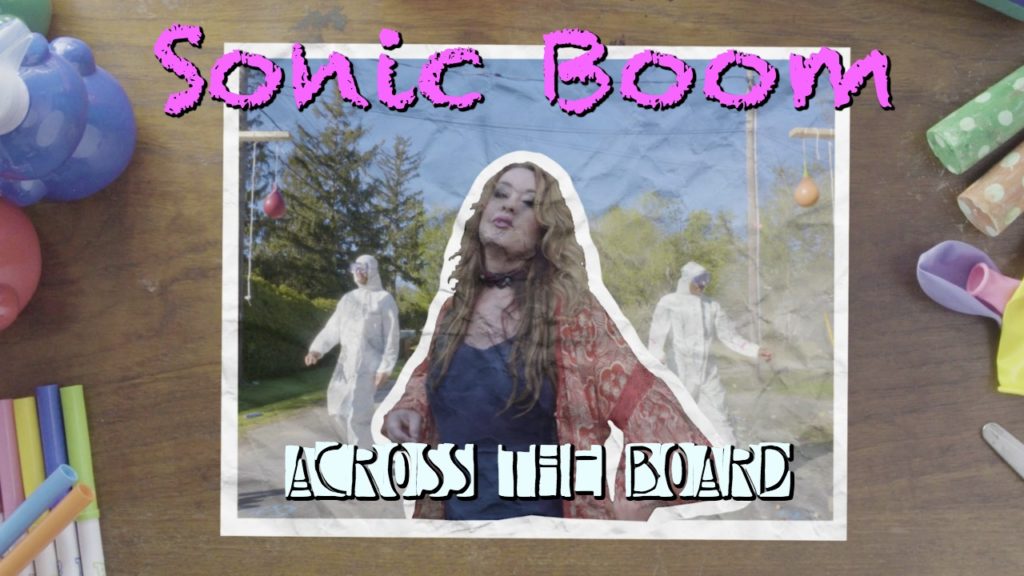 The Toronto-based pop rock band will premiere their new music video and contest for "Sonic Boom" with CanadianBeats.ca on September 4, 2018.
We wrote the title track as that moment in a young person's life when they throw caution to the wind, and set out on their pie in the sky musical journey—no holds barred, full speed ahead...”
— Jacqueline Auguste, Across The Board
TORONTO, ONTARIO, CANADA, August 30, 2018 -- Award-winning pop-rock band, Across The Board (ATB) are releasing the title track music video for "SONIC BOOM," from their latest alb. The video is an innovative, semi-illustrated montage of smoke bombs, confetti cannons, paint guns and cream pies! The video will be premiered September 4, 2018 on popular music site, CanadianBeats.ca.

To punctuate the theme of “breaking a band” by making a big noise, (SONIC BOOM!) ATB’s producers, Darnell Toth & Matt Makarenko, have used an exciting and action-packed choreographed obstacle course for guitar players, Ben Healey and Andy Ramjattan. They don Hazmat suits and make their way through the bombs, guns and cannons, to the beat of the title track from their 2018 award-winning album.

In conjunction with the release of The Official “SONIC BOOM” music video, Across The Board is partnering with Canadian Beats (www. CanadianBeats.ca) to make a donation of $100 to the site, on behalf of the first viewer to share the music video from YOUTUBE ( to Instagram or Twitter with the hashtag “#ReadCanadianBeats”. The same viewer will also receive a swag package from Across The Board, including a signed CD and T-shirt. In addition, the first viewer to share the Official “SONIC BOOM” music video to their Facebook profile and tag “Across The Board” in their post, will receive a merch package from Across The Board, which includes a signed copy of the CD “Sonic Boom”, a t-shirt as well as a Canadian Beats trucker hat and other swag. Read Canadian Beats at http://www.canadianbeats.ca/.

The video, produced and directed by Darnell Toth & Matt Makarenko of MC2 Music Media in Toronto, marks the first major video release off this album. The video will be released Labor Day (Sept 3, 2018) on Youtube here: https://youtu.be/f18x4MIQlkM

“We wrote the title track as that moment in a young person’s life when they throw caution to the wind, and set out on their pie in the sky musical journey—no holds barred, full speed ahead, with all the dedication, determination and drive of a wide-eyed kid,” says lead-singer and principle songwriter, Jacqueline Auguste. “We pictured the listener’s journey through the album like a piece of musical theatre—with a story, a heroine, and the trials and tribulations of a musical climax and anticlimax”, says Auguste.

Canadian rockers, Across The Board, are a band of multi-instrumentalist musicians with over 500 Youtube videos, three original albums and a growing social media fanbase and live audience following. They seamlessly combine creative talents to push their pop-rock sounds to the edge of the rock ‘n roll envelope. With harmonious power vocals and catchy electric guitar riffs, Across The Board have been touring their new album “Sonic Boom” around Ontario, Canada. They are soon to launch their second coast to coast tour in December of 2018, traveling across the country from Toronto to Vancouver and back by rail. Then, an East coast of Canada as 2019 unfolds for the Toronto-based group.

Hear us on Soundcloud: https://soundcloud.com/across-the-board-music

Check us out on Reverbnation: http://www.reverbnation.com/acrosstheboardmusic

Across The Board “Sonic Boom” Official Video