Widely considered one of the world’s all-time greatest guitarists and known amongst his peers as a great collaborator, Eric Clapton will perform the fifth installment of his Crossroads Guitar Festival, on Friday, September 20, and Saturday, September 21 from the American Airlines Arena in Dallas, TX.

Performances are available at 8 p.m. ET on Friday September 20th and 7 p.m. ET on Saturday, September 21st for a live worldwide HD Pay-Per-View on nugs.tv . 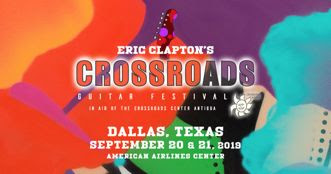 The Pay-Per-View may also be ordered via the nugs.netapp available to consumers on AppleTV, iOS, or Android. They may also watch on internet-connected devices or TV via AirPlay, ChromeCast, or natively in the nugs.net AppleTV app. PC and Mac users may connect their computer to their TV via HDMI for a home theater viewing experience.

The price for each event is US $39.99 and will be transacted at locally equivalent exchange rates.