If you drive east on the Carretera highway from downtown Ajijic towards Walmart, turn left at the pastel concrete sculpture know to locals as “The Shipwreck” and follow the street around toward #2 you will discover the rehearsal studios of Echoes of Pink Floyd, a Pink Floyd tribute band formed and based in Mexico.  Mexicans love Pink Floyd’s music and in fact, one tribute band born in Mexico City, In The Flesh, prides itself on having the exact number of musicians on stage, and precisely the same instruments, costumes, and visuals for each phase of the band’s existence. Echoes of Pink Floyd is more laid back but equally as enjoyable.

However, they are not easy to find.  I found the street, but there was no #2 so I had to call Doug Friend, the drummer, who came out and stood on the sidewalk and waved at me. It seems that #2 is between #13 and #15, hence the need for a guide. 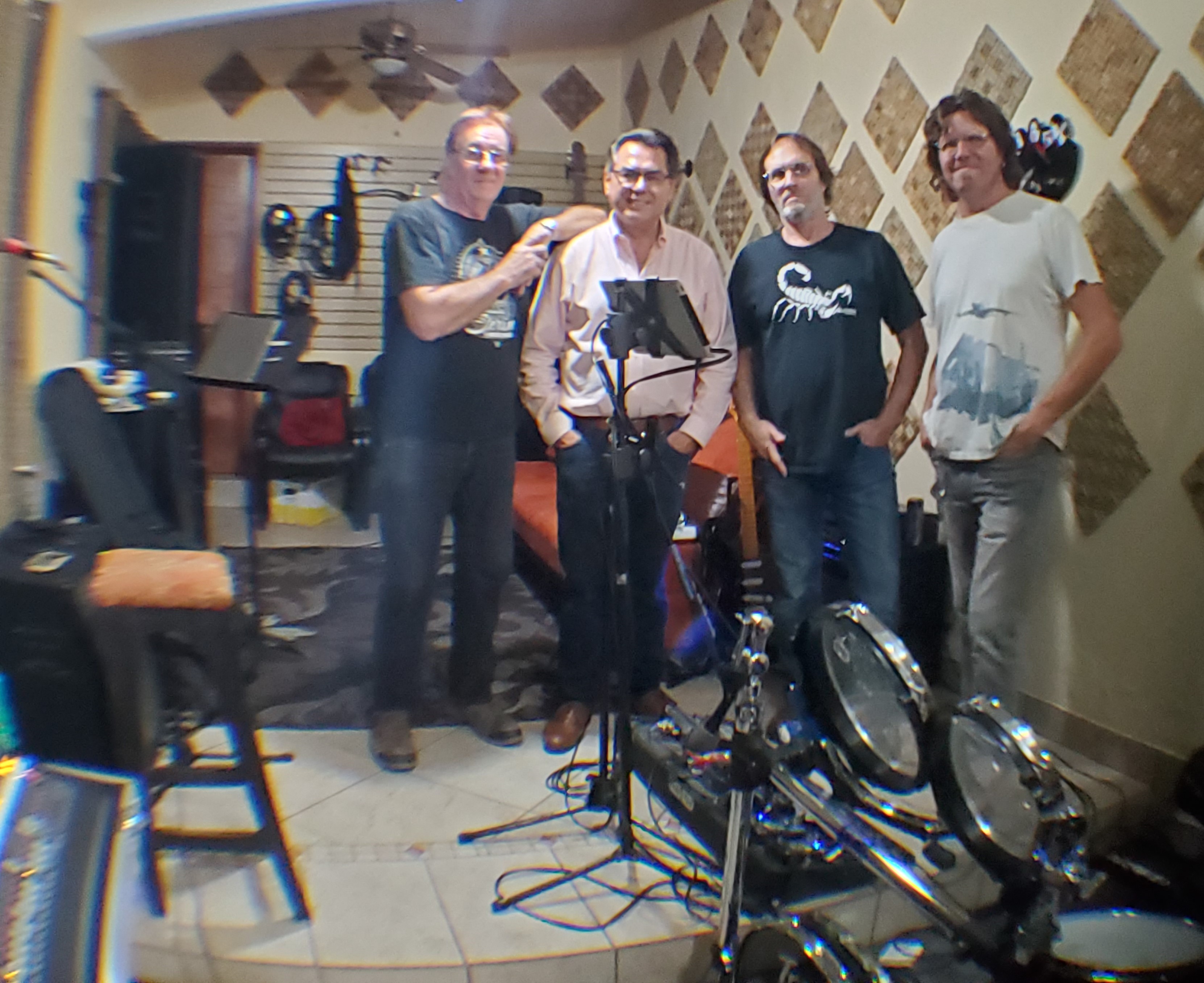 Friend took me through the outer gate, the garden and into a side door where I found myself inside of one of the more impressive converted garages studios I have been in.   Long and narrow, it boasts an impressive Pink Floyd drum kit (although with not quite as many rototoms and Paiste cymbals as Nick Mason assembled), multiple keyboards, a full 16-channel mixing board.  There is also a complete high-quality PA system that they bring to shows —  “bring your own PA to control your sound” says band founder, lead guitarist and vocalist  Arnold Polanco.  Adorning the walls was soundproofing composed of large diamond pads made up of precisely organized and fitted wine bottle corks.

I had seen the band a few nights earlier at The Spotlight in San Antonio Tlacaypan and was blown away by their ability to channel the original band while very subtly putting their own personality into the music.  I was also blown away by their musical chops.  Each of the four band members was technically highly proficient, playing the complex music of PK with ease and few, if any mistakes, plus handling the vocals with aplomb. Even the female singer, Sofia Orendain glided through the difficult notes with power and passion.

So how did an accomplished Pink Floyd Tribute band end up in central Mexico, and why?  Well, as with all bands, there is a story. Founder Arnold Polanco was raised in Laredo, Texas, just across the border from Mexico and was steeped in Mexican culture, music, and language. But he always loved Pink Floyd and about 8 years ago he thought about creating a tribute band but also thought it would be hard to find the right band members.  He had a prog-rock band in Houston and decided to sell his equipment – including his David Gilmore Stratocaster which he thought he would not need anymore – and move to Mexico. 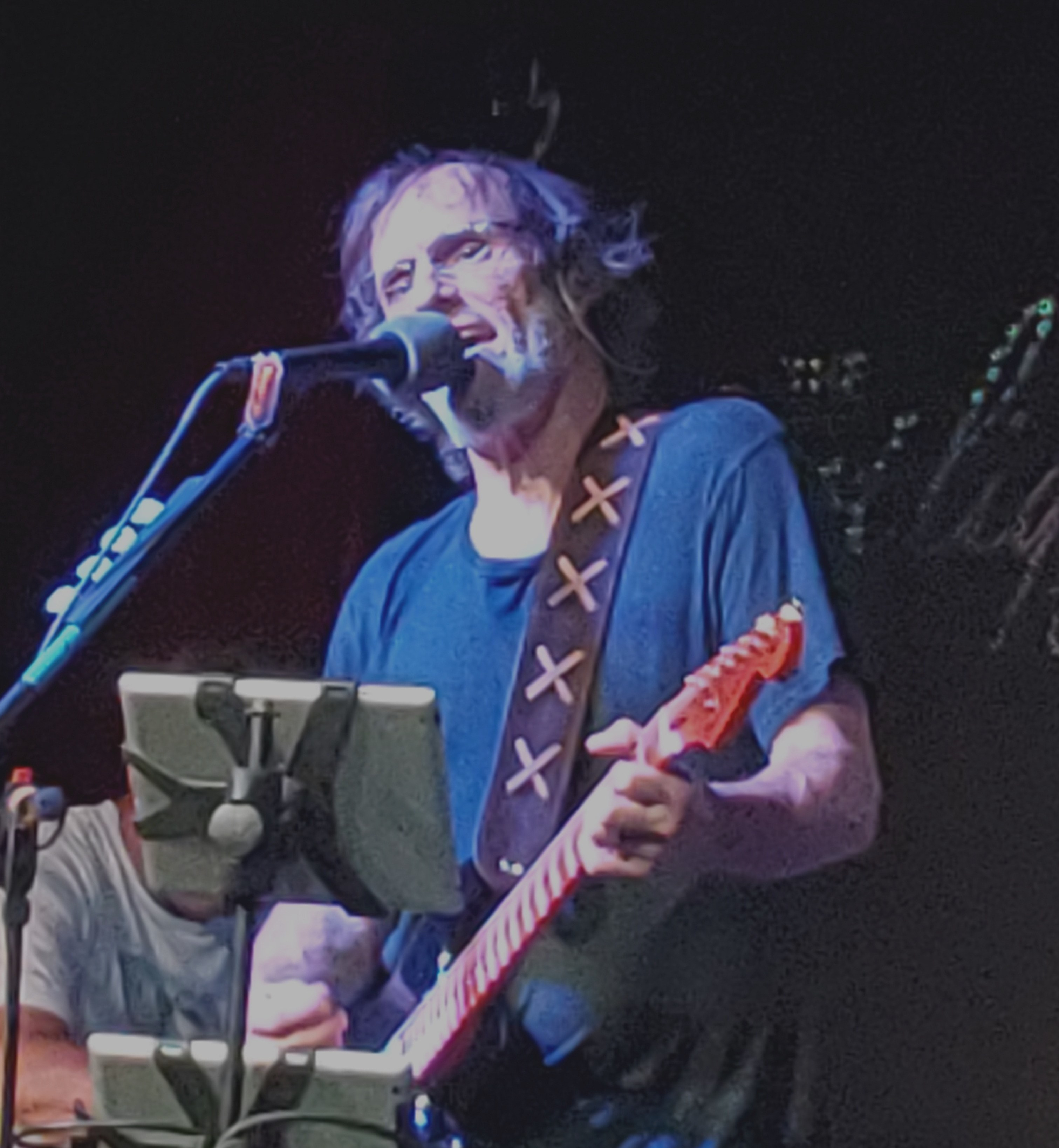 Arnold Polanco at the Spotlight

On Gilmore’s birthday in 2017 he was at a dinner party when a friend of his handed him a rock painted black with the logo for Dark Side of the Moon on it and he said to himself “this was a sign” and decided to do it.

Finding band members turned out to be much easier than he thought.   Polanco had moved to Ajijic by that time and he was able to find the current lineup pretty easily practically in the neighborhood.  So he started the band in April of 2018.  The first recruit was drummer Doug Friend, recommended by another musician who knew them both.  Doug is a former sax man who stopped playing music for several years until he moved to Mexico and taught himself drums. He grew up listening to Pink Floyd and was a drummer looking for a band when the band now called Echoes of Pink Floyd came looking for a drummer. 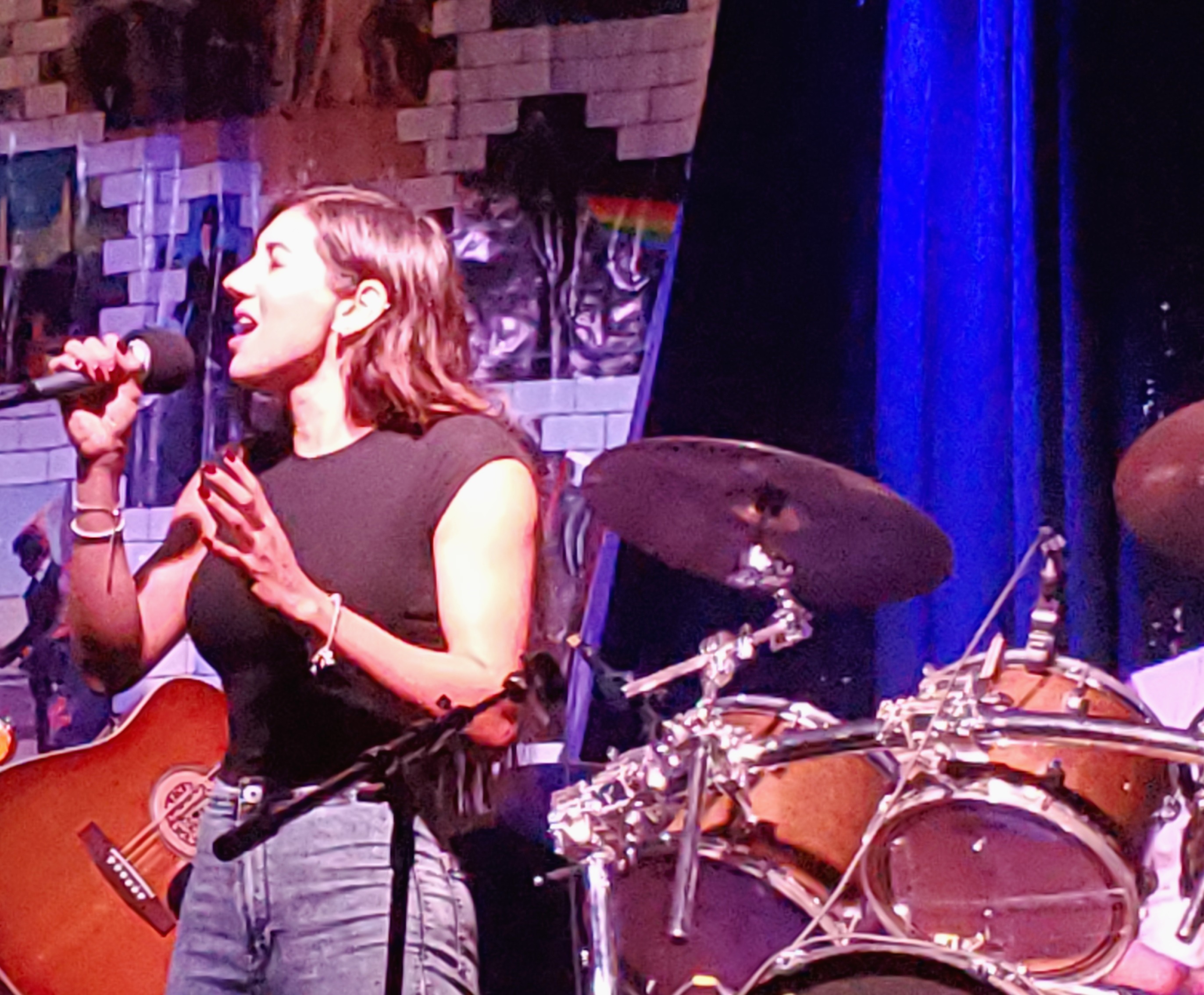 Sophia at The Spotlight

Next Polanco needed a bass player and found the classically-trained Bob Steadman who, ironically had never played Pink Floyd before but took to it like tequila to a tall shot glass. Steadman- who is also a sound engineer – had moved to Ajijic about three years ago when he got sick of snow in Canada,  so he was in place and ready to go. Doug Friend brought in keyboardist, Jorge Orendain, from nearby Guadalajara, and later his daughter, the singer Sophia. They had been in a prog rock band called Anakin years earlier which they had revived in Ajijic.  Jorge was delighted to join because Pink Floyd’s songs are multifaceted, like much Mexican music, and this spoke to his Mexican love of complex, sophisticated music.

The Mexican love of the kind of complexity in Pink Floyd has been somewhat frustrated by geography.  The band’s audience that I saw at formal sit down club, The Spotlight, was mostly ex-pats – Americans and Canadians living in Ajijic.  But the band does draw a local Mexican audience when they play other clubs like El Barco, which is very laid back compared to the glitz and reserved tables of The Spotlight.  They work hard to alert Mexican fans to their concerts and the work pays off in terms of online interest, but much of that comes from younger fans in Guadalajara and it is not easy to entice them to make the 45 min drive to Ajijic for music midweek.   Booking Guadalajara is a possibility they will look into at some point.

In the meantime, they crowd into the studio, sometimes with wives and friends and odd journalists as often as they can and play local venues, packing in crowds who seemingly can’t get enough.  So happy I found them.

Patrick O’Heffernan, PhD., is a music journalist and radio broadcaster based in Mexico, with a global following. He focuses on music in English and Spanish that combines rock and rap, blues and jazz and pop with music from Latin America, especially Mexico like cumbia, banda, son jarocho, and mariachi. He is a cyclist, dancing fiend and also likes to watch his friend drag race. He has relaunched his LA-based radio show Music Friday Live as Music Sin Fronteras- Music Without Borders - from Mexico - tune in every Friday at 1 pm Central