Todd Rundgren, dubbed “Rock’s Renaissance Man” in 1972 by Rolling Stone, will be premiering his bi-weekly live interactive virtual television series “The Todd’s Honest Truth” on his 72nd birthday, June 22, 2020 at 6pm PDT/9PM EDT. A new episode will then go live every other Friday beginning July 3 in the same time slot.

Famously outspoken and opinionated (he was among one of Bill Maher’s most frequent guests on the original “Politically Incorrect”), Rundgren will host the show live from his Kauai property, interlaced with his throwing to pre-recorded packages shot in front of a green screen to provide mood-appropriate settings (a recurring segment dubbed “The Word of Todd”, in which he will be waxing eloquent on any number of topics). He will also be answering audience questions in real time, there will be a live chat window open for viewers to interact, and Todd will encourage audience members to submit content which he will curate in between shows and select standouts for inclusion on upcoming episodes.

“Forty years ago I reserved a transponder on a satellite, hoping to broadcast to homes across the world. Apparently, that satellite got lost or blew up or something so a dream was put on hold… until now! And I don’t even have to leave my house!!!”, Rundgren explained.

The virtual box office to purchase tickets for “The Todd’s Honest Truth” episodes is open as of today: https://onlocationlive.com/category/honesttruth .

The series is being produced in partnership with Future Beat, the leading company producing VIP package experiences for concert tours — futurebeat.com. Todd’s longtime manager, Panacea Entertainment chairman Eric Gardner, is executive producing. In addition to an unlimited number of “general admission” tickets priced at $15 per episode (which includes access via VOD for anyone who missed a live stream), forty virtual one-on-one meet & greet packages will be available for $95 per episode, which will include shipping of an item of exclusive series-related merchandise.

In other news, Todd Rundgren and some well known guest artists are re-recording his 1973 anthem “Just One Victory” and giving it away for free to the Democratic National Committee for use by candidates throughout the US running for public office this fall. Participants include Joe Walsh and Paul Shaffer, along with Don Was, who is co-producing with Todd.

Born and raised in Philadelphia, Rundgren began playing guitar as a teenager, going on to found and front Nazz, the quintessential ’60s psychedelic group. In 1969, he left the band to pursue a solo career, recording his debut offering, Runt. But it was 1972’s seminal Something/Anything?, on which he played all the instruments, sang all the vocal parts, and acted as his own producer, that catapulted Todd into the superstar limelight, prompting the press to unanimously dub him “Rock’s New Wunderkind.” It was followed by such landmark LPs as The Hermit of Mink Hollow and A Wizard, A True Star;  evergreen hit singles include “I Saw The Light,” “Hello It’s Me,” “Can We Still Be Friends,” and “Bang The Drum.” 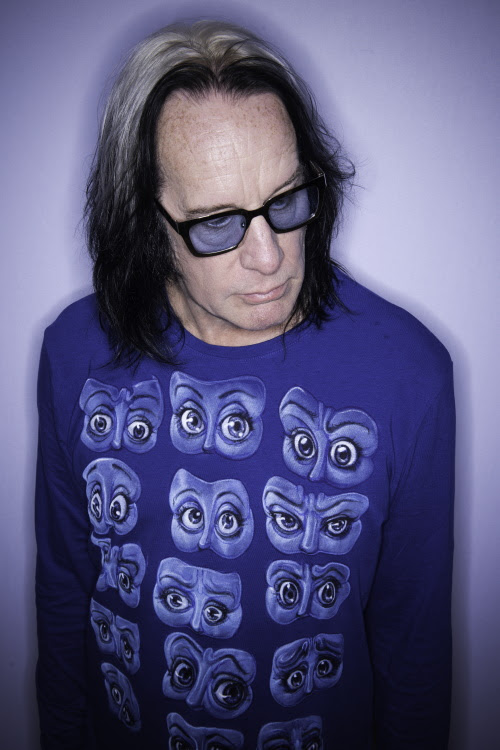 A Wizard, A True Star. The title of Todd Rundgren’s 1973 solo album aptly sums up the contributions of this multi-faceted artist to state-of-the-art music. As a songwriter, video pioneer, producer, recording artist, computer software developer, conceptualist, and interactive artist (re-designated TR-i), Rundgren has made a lasting impact on both the form and content of popular music.

Born and raised in Philadelphia, Rundgren began playing guitar as a teenager, going on to found and front The Nazz, the quintessential ’60s psychedelic group. In 1969, he left the band to pursue a solo career, recording his debut offering, the legendary Runt. But it was 1972’s seminal Something/Anything?, on which he played all the instruments, sang all the vocal parts, and acted as his own producer, that catapulted Todd into the superstar limelight, prompting the press to unanimously dub him “Rock’s New Wunderkind.” It was followed by such landmark LPs as The Hermit of Mink Hollow and the above mentioned A Wizard, A True Star, as well as such hit singles as “I Saw The Light,” “Hello It’s Me,” “Can We Still Be Friends,” and “Bang The Drum.”

In 1974, Todd formed Todd Rundgren’s Utopia (renamed and reconfigured in 1976 as Utopia), an entirely new approach to the concept of interactive musicianship, and embarked on an extensive round of touring and recording. Standout Utopia offerings included Oops! Wrong Planet, Adventures in Utopia, and Oblivion. Along the way, Todd Rundgren’s Utopia combined technical virtuosity and creative passion to create music that initially, for millions, defined the term “progressive rock,” and subsequently, as Utopia, the term “powerpop.”

Rundgren’s myriad production projects include albums by Patti Smith, Cheap Trick, Psychedelic Furs, Meat Loaf, XTC, Grand Funk Railroad, and Hall And Oates. Rounding out his reputation as rock’s Renaissance Man, Rundgren composed all the music and lyrics for Joe Papp’s 1989 Off-Broadway production of Joe Orton’s Up Against It (the screenplay commissioned by The Beatles for what was meant to have been their third motion picture). He also has composed the music for the hit film Dumb and Dumber, as well as a number of television series, including Pee Wee’s Playhouse and Crime Story.

In 2009 Rundgren performed his iconic 1973 album A Wizard, A True Star in concert in its entirety for the first time ever, and several years later did the same with a double bill: Todd & Healing. He has toured with Ringo Starr as an erstwhile member of the AllStarr Band since 1989, and continues to perform with symphony orchestras both domestically and internationally. In 2018 he toured North America with original Utopians Kasim Sulton and Willie Wilcox for the first time in 33 years. His long-awaited autobiography The Individualist, was recently released; he’s currently in the second year of the world’s first hybrid concert/book tour highlighting music across his 50-plus year career.

In 2017 on successive weekends he was awarded honorary doctorates from both the Berklee School of Music and DePauw University.

In 1998 Todd debuted his new PatroNet technology which for the first time allowed fans of a musical artist to subscribe directly to the artist’s musical output via the Internet. This caps a long history of groundbreaking early multimedia “firsts,” including:

• 1978: The first interactive television concert, broadcast live over the Warner/QUBE system in Columbus, Ohio (the home audience chose each song in real time during the concert by voting via QUBE’s 2-way operating system).
• 1978: The first live nationally broadcast stereo radio rock concert (by microwave), linking 40 cities around the country.
• 1979: The opening of Utopia Video Studios, a multi-million dollar state-of-the-art facility. The first project produced by Todd there is Gustav Holst’s The Planets, commissioned by RCA Selecta Vision as the first demonstration software for their new videodisc format.
• 1980: Creation of the first color graphics tablet, which was licensed to Apple and commercially released as The Utopia Graphics Tablet.
• 1981: Time Heals, the first music video to utilize state-of-the-art compositing of live action and computer graphics (produced and directed by Todd), becomes the eighth video to be played during the launch of MTV on August 1, 1981.
• 1982: The first live national cablecast of a rock concert (on the USA Network), simulcast in stereo to over 120 radio stations.
• 1982: The first two commercially released music videos, one of which was nominated for the first-ever Grammy awarded for “Best Short Form Video” in 1983.
• 1992: The first commercially available music downloads via CompuServe.
• 1993: The release of No World Order, the world’s first interactive record album on CD-i.
• 1994: The release of The Individualist, the world’s first full-length Enhanced CD.
• 1994: The world’s first interactive concert tour.
• 1998: Launches PatroNet, the world’s first direct artist subscription service – predicts that someday “music will be sold by the pound.”
• 2016: The production of the world’s first full length concert shot with multiple Virtual Reality 360º cameras.