Creating music from home is an entirely different, more personal experience, specially when compared to being in a professional music studio. Quite often working from home is when musicians and producers come up with some of their best stuff, so why not take advantage of this? Creating music at home has never been easier, especially now there are many impressive portable desktop interfaces along with some good microphone choices available on the market.

To create music from home you will need a selection of basic equipment which would allow not just to record, but also for you to monitor your sound. 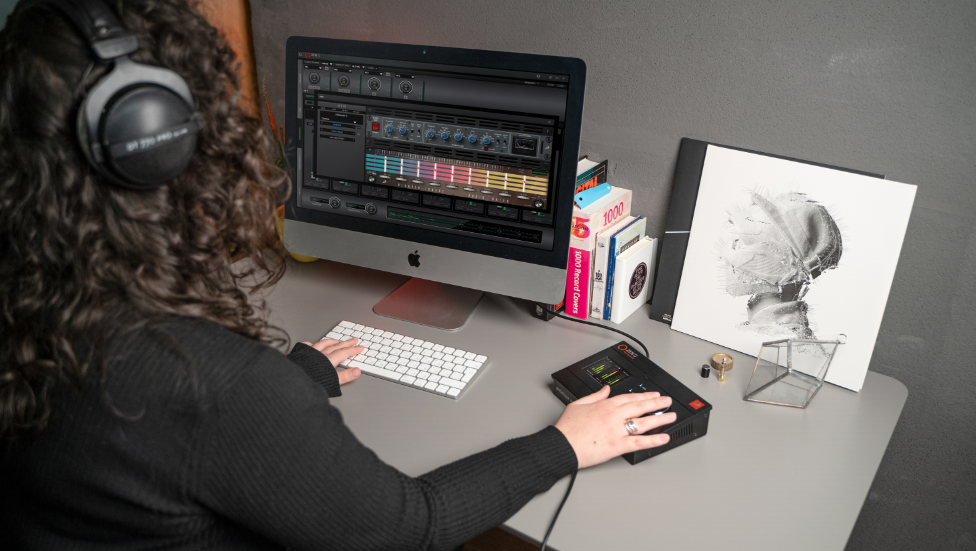 So, what is needed to start producing/making music from home? The most important piece of equipment is the thunderbolt audio interfaces . Interfaces provide the connection to a computer to allow for recording. They contain pre-amps for microphones and instruments, they also allow for connecting speakers (monitors) as well as headphones, allowing for the music to be monitored during recording and playback.

When looking for an interface music makers have a handful of considerations when choosing the right one for them. How many inputs and outputs they need, quality of preamps and converters, expansion potential, portability, and space required. When first starting out in making music, a good number of inputs to have is between two and four, along with at least two monitor outputs to allow for a set of monitors. Headphone connectivity is a also necessity during recording to avoid any possible feedback issues.

Arguably just as important as interfaces, are microphones. Microphones allow for recording of sound sources which can’t be directly plugged in to your interface using a cable, a guitar, or bass guitar for example. There are many microphones on the market, and because of this there are many things that need to be looked at. What sort of role the microphone will be utilized in, how much use it would see, and how much the mic costs.

Microphones come in various types, all of which have their optimal use. The types of microphones are condenser (large diaphragm and small diaphragm), dynamic, and ribbon. There are other types, but they tend to be a bit more niche. For vocal recording at home, large diaphragm condensers tend to give the best quality and a truer representation of the voice recorded. Large diaphragms can also be used for a wide variety of sound sources so allow for flexibility.

However, microphones do have their own frequency responses. Because of this, microphones are quite personal when it comes to selection. Some people might sound amazing through a large diaphragm condenser, whereas some people might not, and sound better via a ribbon microphone. When possible, testing a microphone before purchase is the best course of action.

The final step in the setup, in terms of hardware at least, is monitoring what you are recording. Monitors are a lot like microphones when it comes to selection, there are many different models, and finding the right pair for your ears can take a while. Generally different brands and models all sound different, but there are general rules of thumb when looking for a set. Generally speaking the wider the frequency range the better, as it allows for hearing a truer representation of the original sound recorded. Another thing to consider is whether the monitors are active or passive. Passive monitors require an amp. The amp is designed to boost the signal from your interface to allow the monitors enough power to produce the desired loudness levels. Whereas active monitors have an amp built in, the possible downside being they require a power cable.

Headphones like monitors have a few considerations. Just like monitors they have many manufacturers and models, along with having frequency ranges that need to be thought about. However unlike monitors, headphones come in three varieties, closed-back, open-back, and semi-open. These are differentiated based on how the speakers are housed in the headphones. Closed-back are fully closed off meaning less sound escape, open-back are open allowing the sound to escape, semi-open are somewhere between the two. All 3 variations have their own benefits and downfalls. For instance, closed-back are best for the recording process due to there being less sound escape, and open-back are best for the mixing process as the open back allows for less listening fatigue.

When making music at home there are many considerations that need to be looked at to get the optimal sound and workflow. When first starting out the most important piece of equipment to get first is the interface, getting a good quality interface which allows for optimal workflow would set the pace for your future in music making. One interface that is well rounded with a good number of inputs and outputs, along with allowing for expansion and a good workflow is the Antelope Audio Zen Q Synergy Core.